We have some new babies arrived for 2012.

Charlie the Chinchilla has taken up residence in the office. She loves a good run around the desks - though we don't seem to have 'chin-proofed' the room quite as well as we thought. Edith the rat really doesn't know what to make of this bouncing half squirrel/half rabbit! 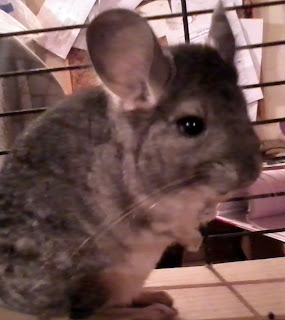 Also arrived this month is a baby Boa Constrictor. It's feeding well, but needs a lot more growing and handling before it'll be ready for meeting the public.

We're now just waiting for an African Pygmy Hedgehog - who should be with us in February and hopefully some hand reared owls later in the summer.

January has been a fairly quiet month, which has allowed us to crack down to building the new enclosures. February is much busier - still room for some Birthday Parties at the weekend though!

Posted by Chris's Animal Encounters at 08:21

Chris's Animal Encounters
Chris's Animal Encounters offers exciting and educational animal handling sessions for Schools, Birthday Parties and Evening events. Using a wide range of animals including African Land Snails, Tarantulas, Snakes and Lizards, Hedgehogs and even Birds of Prey you can be sure it will be an experience that is never forgotten. Follow us at www.tropicalencounters.co.uk or on Facebook.